Why join the No5G Party?

The world is changing and moving at an incredible pace, technology is changing constantly and like most people, we want to make sure it’s safe.
What people may not know is that the current roll out of the 5G telecommunications network, is a massive undertaking being coordinated around the world and pushed by the corporate elite. Engulfing the entire planet via 100 thousand satellites, millions of telecommunication towers, small cells and billions of 5G connected devices flooding the world with invisible electro smog pollution in the form of electromagnetic radiation.

The 5G rollout will increase man-made electromagnetic radiation at unprecedented levels with little to no concern for the safety and wellbeing of the humans who will be exposed to it.

That’s why we have formed the No5G Party to promote legislative schemes, laws and policies to regulate 5G and associated technologies and to ensure independent and thorough studies are conducted. To ensure that the wireless 5G rollout is halted until there is an overall medical consensus proving that electromagnetic radiation is safe for human health, flora, fauna and property.

Our governments are one eyed, arrogant and hell bent on eroding our freedoms and implementing the divide and conquer mentality on the Australian population. They have truly divided society into two classes of citizens via fear mongering, causing families, friends and work colleagues to shun and turn on each other, based on the fear and discriminatory propaganda surrounding vaccination status.

Hundreds of thousands of good hardworking people have been terminated from their employment based on extremely dubious, untested and untried experimental trials. Science is in the twilight zone and our trust for it has also taken a huge battering. The mainstream media have closed ranks and spruik the governments vaccination narrative, censorship of free speech and intrusive fact checking of social media posts have all but put an end to what was once “health” and a balanced debate on the issue.

Oppression in all its guises has now become the norm against anyone who dares speak out in protest. Australians are being treated with the utmost suspicion and are tracked and investigated.

Highly respected medical practitioners are being raided by COVID-19 authorised officers, confiscating patient files and had their practicing licence suspended whilst being investigated. These doctors suffer the indignity of being hauled before medical boards for simply filling out medical contraindications that are in the best interest of their patients.

The world has become a terrifying place when our much revered doctors are silenced for doing what they know is right in their professional opinion for their patients. Doctors are threatened with being struck off if they speak against the tyranny.

The regulators have captured the medical profession and have taken the role akin to the East German secret police during the cold war. Vaccination passports have become the new currency in buying freedom and people have been pressured, bullied, coerced and manipulated to play Russian roulette with the COVID -19 vaccines in order to gain some slight respite from the oppression.

The politicians are not listening to the people and have blindly and arrogantly enacted policies and legislative changes that are causing extreme hardship within the Australian community. Causing suppressed anger, anxiety and fear in the hearts of all of us, boiling over causing hard working decent Australian citizens to rise up, rebel and protest in the streets.

Since the Corona outbreak and the Orwellian laws that have been imposed on all of us, defending our freedom is now more important than ever before.

If we don’t do something now it will be too late. Let’s act now to protect life and safeguard our children’s future.

Become a member of the No5G Party!
Let’s work on protecting life and freedom! 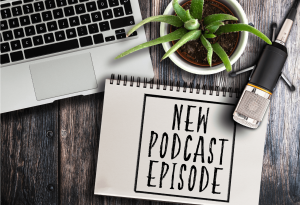 New A6 flyer for local residents 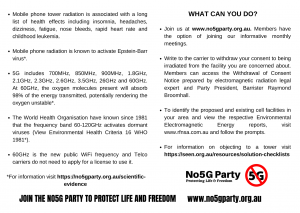 Documentary – Something Is In The Air 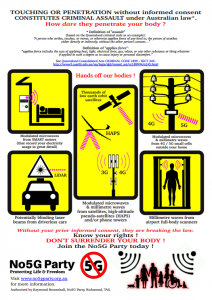 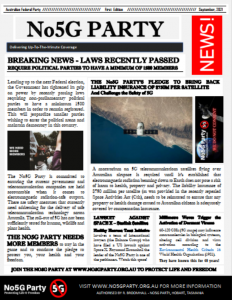 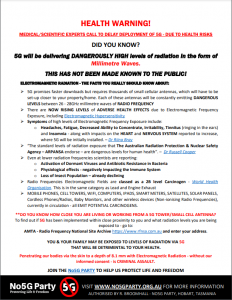 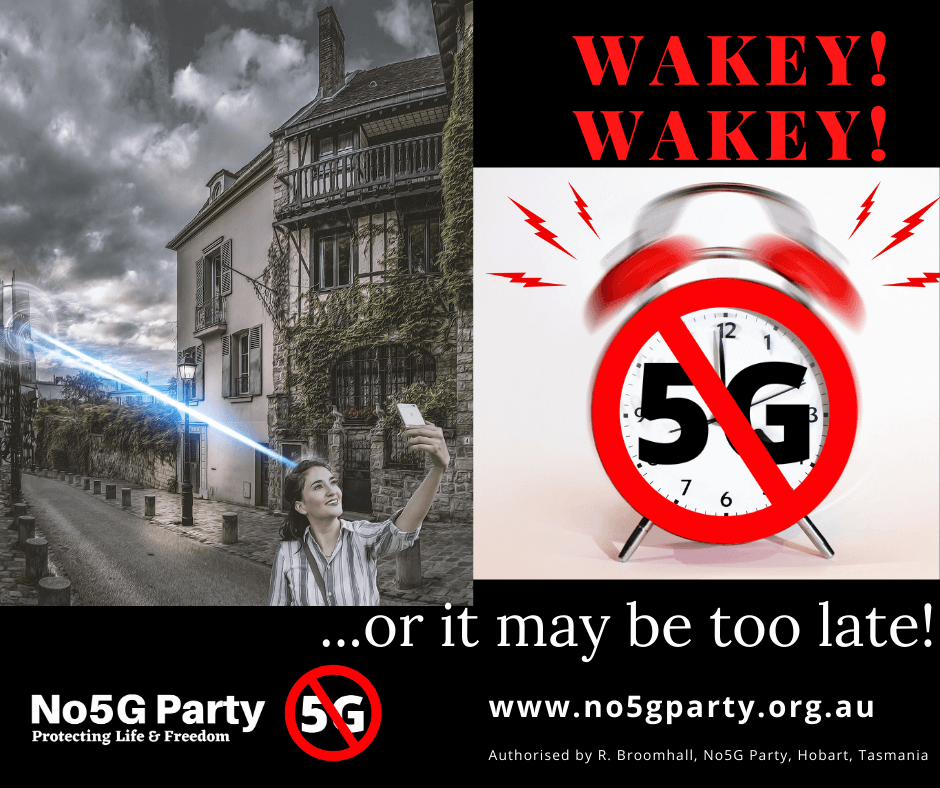